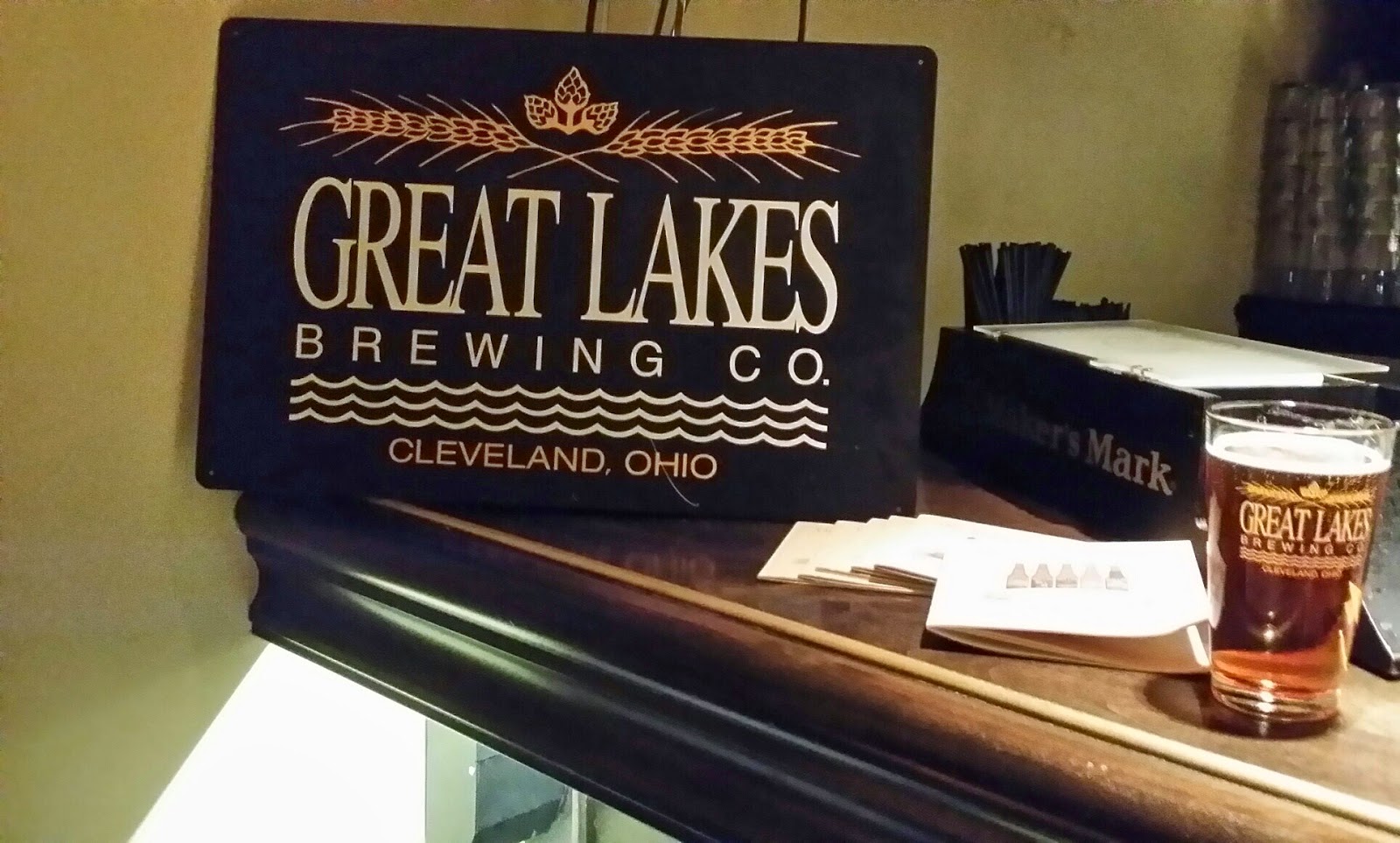 In the Beginning...
Among tree-lined streets in Chicago's Hyde Park neighborhood stands a grey stone building whose Gothic facade, airy galleries, and Art Deco fixtures harken back to a time when universities embodied loftier ideals like Indiana Jones-style exploration, scholarship for its own sake, and congruous campus architecture*.  This is the University of Chicago's renowned Oriental Institute where such luminaries as James Henry Breasted and Leo Oppenheim laid and built upon the foundations of Ancient Near Eastern scholarship.  Our story begins within these halls, with a doctoral student whose professional and academic interests collided with his passion for beer, resulting in a truly memorable evening.
*If you've visited Hyde Park in the last 10 years, you'll understand this reference.


Back to the Present
Following up on the success of their previous Sumerian Beer Dinners, Great Lakes Brewing Co held their first installment of the 2014 version at the Gage Restaurant on Michigan Avenue in downtown Chicago on the evening of March 19th.  Here, 40 or so attendees were treated to some of the Cleveland craft brewer's best-known contemporary beers paired with a specially chosen menu, in anticipation of the evening's main event, the tasting of Great Lakes' painstaking recreation of a 4000+ year old Sumerian beer.

In addition to the staff from the Gage, in attendance were several representatives from Great Lakes, including Pat Conway, U of C alumnus and one of Great Lakes' founders, Luke Purcell, their Brewmaster, and Michael Williams their resident "Sumerian Beer Specialist".   As with previous Sumerian beer dinners, they were joined by Tate Paulette, the aforementioned U of C doctoral candidate who has written and lectured extensively on brewing and storage practices in ancient Mesopotamia.  Some of Paulette's work in this area has involved trying to determine the techniques and ingredients used by Sumerian brewers, an effort which has, not surprisingly, been quite challenging. 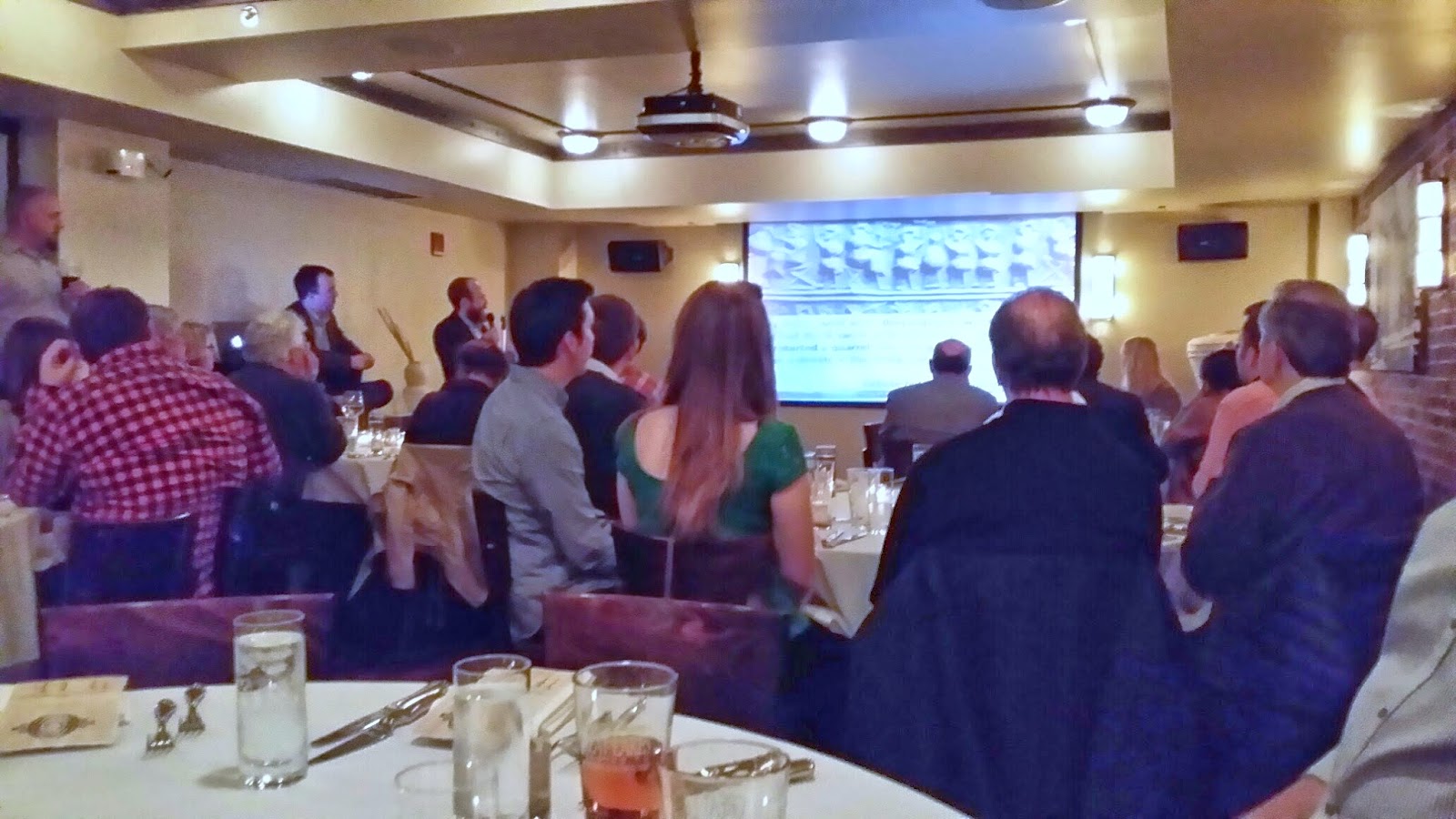 After the pre-event cocktail hour had warmed up the audience for the serious business of drinking, Paulette launched into his lecture, providing first an overview of relevant Sumerian geography and culture, then analyzing the "Hymn to Ninkasi", dedicated to the Sumerian goddess of alcohol.  It was this poem which provided the basic recipe for the beer which was to be served later that evening.  Now, let that sink in for a minute.  We were about to sample beer based on a recipe derived from an almost 4000 year old poem written in a language that's well understood by a hundred or so people worldwide.  I'm starting to understand how John Hammond must have felt in Jurassic Park.  Finding a clay tablet with a complete beer recipe would have been like discovering an entire Brontosaurus trapped in amber stuffed in the crotch of a tree.

Humor aside, this is exactly what made this evening and the whole enterprise so very compelling.  If it were a matter of simply following a recipe anyone could do it.  It's the complex and scholarly nature of this process and the need to fill in so many gaps with educated guesses which makes this such a intriguing topic as well as a labor of love for those involved.


Creating the Beer
One of the principal mysteries surrounding the reproduction of Sumerian beer is how yeast was introduced into the mixture during the brewing process.  There are several plausible theories for how this could have occurred, three of which were discussed that evening.  The yeast could have been passed along in the earthen vessels in which the beer was fermented, likely kept alive in the vessels' ridges from batch to batch.  It could also have been introduced in the "bappir", a type of bread used in brewing, and mentioned explicitly in the Hymn to Ninkasi.  Another theory is that it could have arrived through wild yeast strains present in the air, in what is known as spontaneous fermentation.  While elements of each of these theories support and diminish the likelihood that they were the source of the yeast, without further evidence, there's no way of confirming which one is correct.

An even more basic question that Paulette and the brewers had to answer before starting was which ingredients to use.  Not surprisingly, the poem provided much of this information, but as with the yeast, they had to extrapolate where the recipe was incomplete.  The ingredients from the poem were supplemented with those known to have been available in Mesopotamia at that time, including:
Not content to simply duplicate the recipe, Great Lakes took the process a step further and used both historically accurate brewing vessels and even cooking techniques, though thankfully not the cooking fuel, (hint:  there was a lot of livestock in Mesopotamia) to prepare the evening's featured beers.

Great Lakes provided 3 Sumerian-style beers for this event.  Gilgamash (named for the Sumerian King, supposed demigod, and sometime epic hero, Gilgamesh), Enkibru (named for the wild man, Enkidu, a central character in the epic of Gilgamesh), and Enkibru with Date Syrup.  Of the three, only Gilgamash was produced using modern brewing equipment.  Below are brief descriptions of each.


In Closing...
While the beer may have stolen the headlines, no small amount of the evening's success was due to the intimacy of the surroundings provided by the Gage and the approachability of the organizers from Great Lakes Brewing Co. and the University of Chicago.  The subject was compelling on its own, but everyone's enthusiasm and candor made it that much more so.   Additionally, the excellent food and modern beer pairings provided by The Gage and GLBC, made the night a real pleasure. 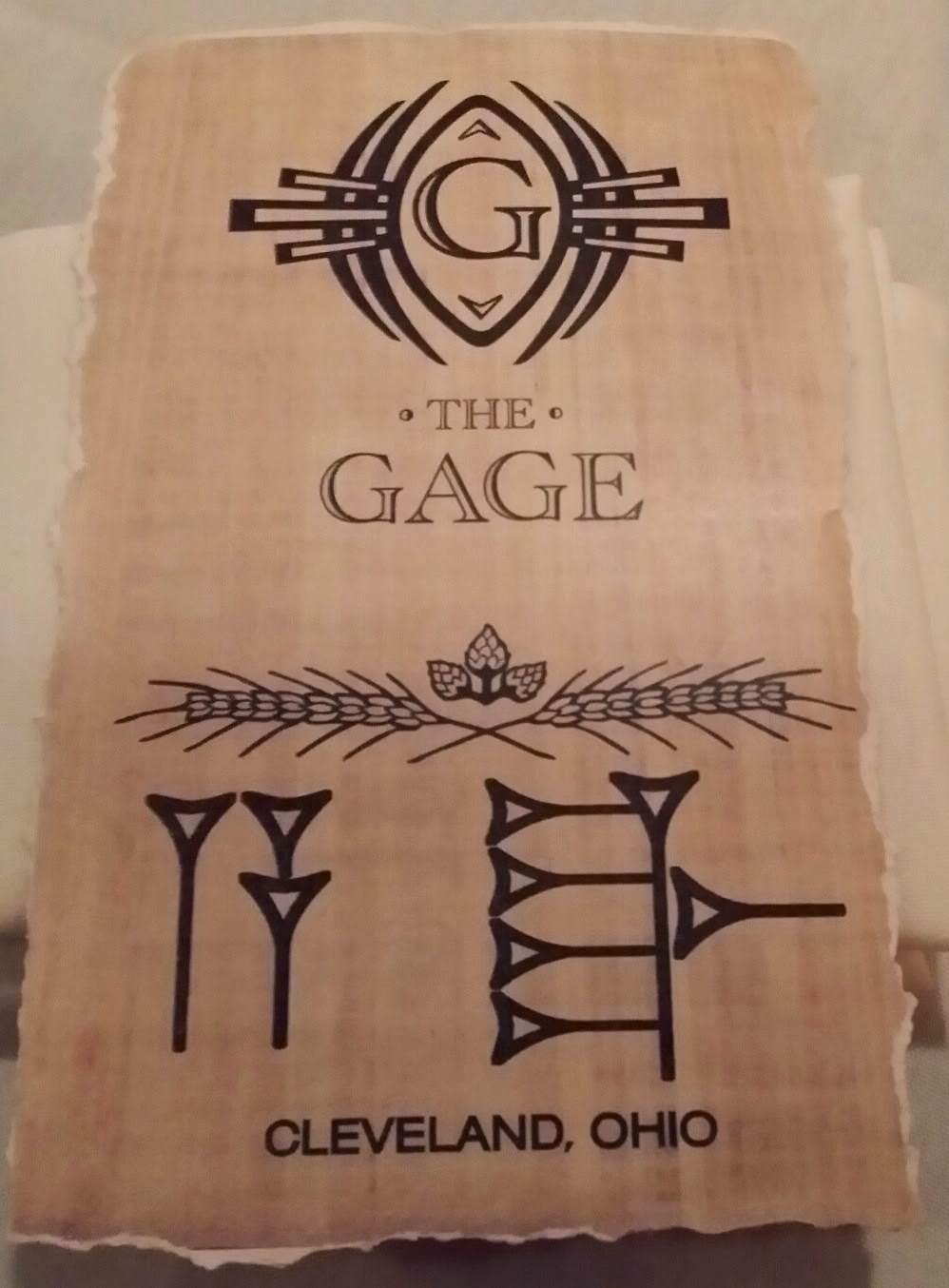 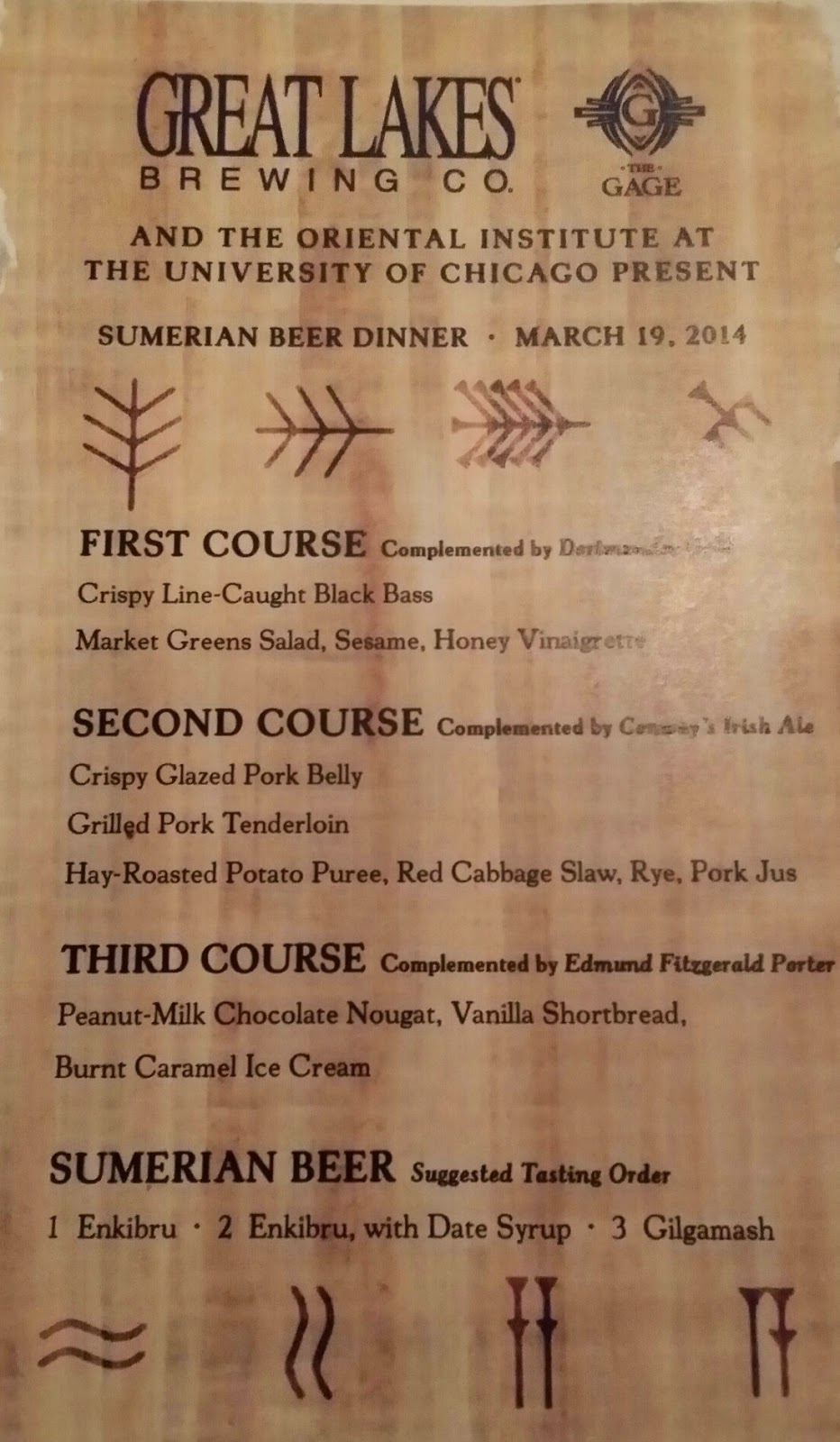 While any beer event is cause for at least minor celebration, this one was especially enjoyable for me, having spent much of my childhood roaming the halls of the Oriental Institute when my father was Director.  While my visits to the OI are rare these days, it's even rarer that Dad and I (and my better half) get together for a beer, as he's more of a cider drinker.  For that reason and those mentioned above, this was a congenial way to mingle our recreational and professional interests.  Now all that we have to do is wait for someone to brew an Akkadian beer, and we're really in business. 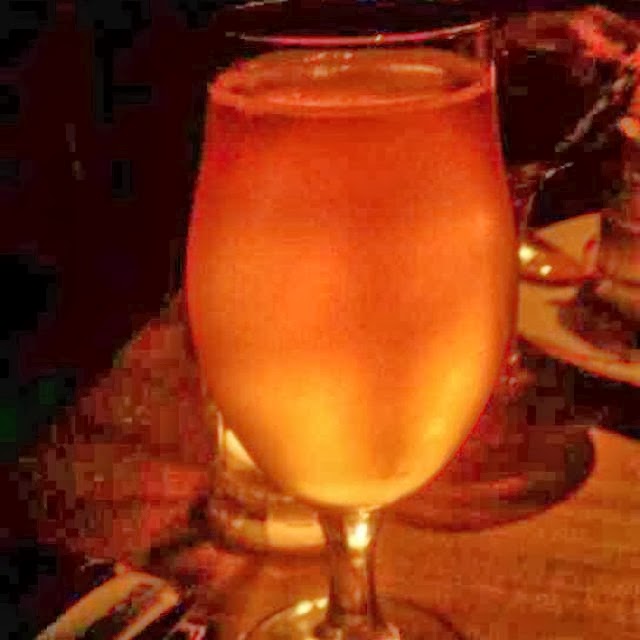